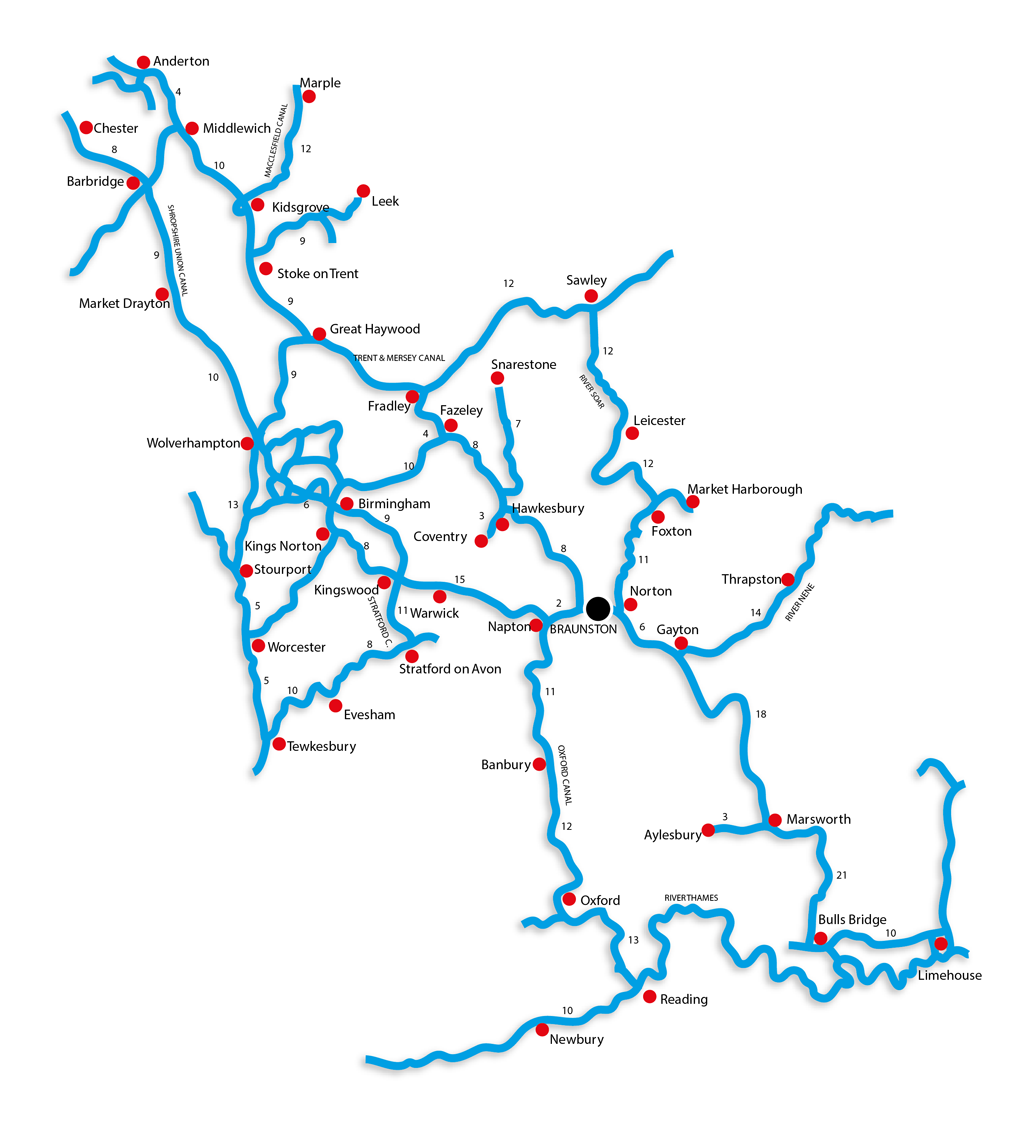 These are longer routes and they can be linked together for extended holidays. Remember these are our suggestions but the canal network is open to you to explore.

The Warwickshire Ring
This circular route can be done clockwise or anti clockwise, there are 2 variations but this is our favourite.

About 52 hours cruising including 93 locks

This route has a good selection of pubs and places to stop for entertainment from swimming pools to skiing and theatres to theme parks.

Heading west from Braunston meandering through scenic countryside and dropping down 3 locks at Calcutt, leads to a ideal first night stop at The Boat near the top of Stockton Locks. The next leg of the trip takes you down 21 locks spread out over 10 miles, all the way to the aqueduct over the River Leam. Take a quick look at historic Warwick and then embark upon the exhilarating climb up the “21 steps to Heaven” of the Hatton Locks. Travelling through Shrewley Tunnel brings you to Kingswood Junction to join the North Stratford Canal. Lapworth has 19 locks taking you towards Birmingham.

The unusual ‘Guillotine Stop Lock’ heralds the end of the Stratford Canal and the start of The Worcester and Birmingham Canal. On to Bournville with its famous Cadbury’s World and the smell of chocolate in the air. Gas Street Basin is in the Heart of Birmingham. There are many places to visit The Mail Box (designer shopping) The Bull Ring, Theatres and The Sealife Centre all just a step from your boat. Leaving central Birmingham descending Farmers Bridge and Aston Locks you will find yourself travelling below Spaghetti Junction with its mass of traffic above and The River Tame hidden from all but the boater. Very soon you are out of Birmingham and back to the countryside locking down The Curdworth flight towards Drayton Manor Park where you can moor just outside the entrance. From Fazeley Junction there are only 17 locks back to Braunston.

About 67 hours cruising including 100 locks

The first hours 3 hours of your holiday will take you through Braunston’s 6 locks, a tunnel and on to Norton Junction. At Norton turn left heading towards the Watford Staircase, a practice run for Watford Locks later in the week. This is a peaceful twenty mile stretch of canal has an abundance of flowers, animals and bird life. A leisurely day sees you on the lower slopes of the Laughton Hills with the countryside extending below, an awesome sight. Get ready for Foxton Staircase Locks with the Incline Plane Museum to visit. Soon you will be joining the River Soar just before Leicester, as it meanders slowly over the wide flood plain. Here you can enjoy the beautiful wooded cuttings of the Soar Valley before it joins the mighty River Trent. Approximately two miles upstream on the River Trent and you will re-enter the canal network at the well-preserved port of Shardlow. Back on the Trent and Mersey Canal as far as the famous Swan pub at Fradley Junction, finally turning left onto the Coventry and Northern Oxford Canals, heading back to Braunston.

The Thames Ring
can be done clockwise or anticlockwise

About 124 hours cruising including 175 locks

Down the Grand Union Canal to London, like the old boatmen used to but with a comfortable modern boat, pass Bulls Bridge and it’s wharf, famous for the book, ‘A Maidens Trip’ which is about the Idle Women working the narrowboats during the war. Descend Hanwell Lock Flight past Osterley House and Park arriving at Brentford Dock with your first glimpse of the River Thames. Once on the river there are many famous landmarks to enjoy, Syon House and Park, Richmond, Twickenham, Teddington, past Hampton Court and on to Windsor (check to see if the flag is flying) Henley, Dorchester, Abingdon and back to the canals at Oxford. Once back on the Oxford Canal its contour straggles the countryside, leaving Oxford behind. The original black and white cast iron bridges, a few being lift bridges, are of particular interest. Many of these dates back to 1700’s when the Oxford Canal was first built. The adjoining fields are mainly ridge and furrow with canal side pubs along its banks. The Oxford Canal was originally built to take coal to London, but trade moved onto the Grand Union Canal when it was built leaving this canal unspoilt. The canal follows The River Cherwell for many miles to Banbury before heading north to Braunston.

Remember: The River Thames is regulated by separate navigation authorities and you will need to purchase an additional licence. Unlike the canal system, water and moorings along the way may have to be paid for.